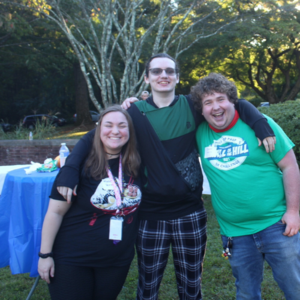 Killian was a member of the Straff House Dorm Program and currently studies welding at Delaware Valley Community College.

Killian Herbison came to Hill Top Prep in ninth grade in need of a change. After years in the public school system, he was burnt out to the point of experiencing mental breakdowns and apathy in the classroom, where he regularly slept. By ninth grade, it was apparent he needed a different type of learning environment.


After spending a day shadowing at Hill Top, Killian noticed the vast differences from public school.


“The teachers didn’t act the way I thought they would. They understood the disabilities of their students. They seemed to understand me, and I didn’t even go there yet... Going into Hill Top for the shadow days and gaining understanding… lt was liberating,” he said.


After enrolling, it wasn’t smooth sailing right away. Killian initially struggled with social interaction because he was accustomed to being judged for his issues and didn’t feel comfortable in his own skin. Gradually, he came out of his shell. Killian credits group therapy, where he could work through his thoughts and feelings in a safe space, and a new environment with smaller classes. Regular breaks built in throughout the day were key to helping him find success.


“Hill Top is exponentially more understanding and way less stressful than a regular school… When I initially got into Hill Top, I had a really short social battery, so I would run out of energy really quickly. The breaks throughout the day helped a lot,” Killian said.


“I have tinnitus (ringing or buzzing in the ears) because of how much stress my system puts on itself all day. As a student at Hill Top, I could actually hear my own thoughts again.”


As Killian grew more comfortable at Hill Top, he began taking advantage of the school’s clubs and activities, joining the soccer club, the outdoors club and participating in many of the Fun Friday outings and ski trips.


After ninth grade, Killian became a member of the Straff House Dorm Program, a decision that he says, “is literally the best thing to ever happen to me.”


Killian spent the remainder of his high school career in the dorm, and also stayed for part of a post-graduate year before the Covid-19 shutdown. Beginning in eleventh grade, Killian enrolled in Delaware Valley County Community College. He would take his high school classes at Hill Top during the day and his college courses in the evening. He credits the dorm program with helping him develop the maturity and skills necessary to succeed in college.


When Killian started at Hill Top, it would take him several hours to write a couple of paragraphs. By graduation, he was able to write pages at a time. He believes the support of the special teachers he encountered at Hill Top and the bonds he formed with them were pivotal in overcoming his academic obstacles.


In college, Killian explored various fields including computer science, psychology and biology. He eventually discovered welding, which has turned into a budding passion. He started with stick welding and is gradually progressing in his techniques. His current favorite is oxy-fuel cutting, which in layman’s terms means cutting pieces of metal using a blowtorch. While welding is a potentially dangerous task that requires a high degree of concentration, Killian believes Hill Top prepared him for the experience by increasing his attentiveness and focus. He enjoys the repetitious nature of creating welds and working with his hands.


Killian is grateful for the social and academic growth he achieved at Hill Top. He is especially thankful for the Straff House Dorm Program, which he believes positively changed the trajectory of his life for the better.


“If I hadn’t lived in the dorm, I don’t know if I would have been ever able to function properly. I wouldn’t be as far progressed as I am right now.”