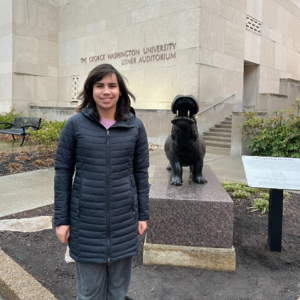 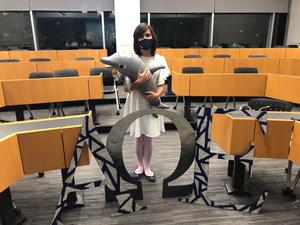 Hailey is majoring in Environmental Science at George Washington University.

Hailey Newbold was looking for a fresh start when she transferred to Hill Top in middle school. She wasn’t miserable at her previous school, but she didn’t feel at home either. She didn’t fit in as easily as some of the other students and often felt out of place being one of the few students in the school that had an aide assisting her during class.


The transition to Hill Top was an adjustment. Hailey navigated middle school curricula, expanding her social bubble and dealing with behavioral issues that hampered her social and academic growth.


“I looked at how I was bothering people and realized that my behavior is disrupting and that I’m lashing out at people… I started being friendlier to people. I put myself out there, and then stuff became way easier because I realized that I clicked with people once I reached out to them.”


Hailey embraced Hill Top’s tight-knit community and dove into extracurricular opportunities, joining both Middle and Upper School Student Council, National Honor Society, Outdoors Club, Horseback Riding Club, and Drama Club. Another important group Hailey joined was the Sexuality and Gender Alliance (SAGA). Hailey, who is transgender, stated, “SAGA really helped me out with feeling good about being part of something and feeling more comfortable being myself.”


When it came time for the college application process, Hailey wanted to research schools that had strong environmental programs and were inclusive of LGBTQ people. With the help of Hill Top’s Director of Secondary Transition, Amy Gillespie, Hailey narrowed down her choices and selected George Washington University in Washington D.C. She is majoring in Environmental Studies and has a specific interest in biology. She is also involved in numerous organizations on campus including student theater and her sorority Alpha Omega Epsilon.


While college can be challenging under any circumstances, the pandemic flipped the traditional college experience upside down. Hailey faced the normal difficulties any student might run into and also had to deal with the isolation and lack of social events due to quarantining. During those times, Hailey stressed that she had to be her own cheerleader and also relied on support from her family, friends, and boyfriend.


Hailey is thankful for the time management skills and work ethic that Hill Top ingrained in her because they have been hugely beneficial in college. She still uses an assignment planner to help manage her schedule, and advocates for herself, visiting professors during their office hours and utilizing the Disability Supports Services for accommodations with her classes.


Hailey is grateful for her time at Hill Top and appreciative to have been part of a “neurodiverse hot spot”, where she was able to grow socially and academically and come into her own. She will never forget her experiences participating in Art Soup, as both a vocalist in the house band and as a member of poetry club, or even her silly memories with her friends such hosting a funeral around the toilet for the class fish. Hailey will always be thankful for the teachers and mentors she encountered at Hill Top and for the school environment where she felt at home.