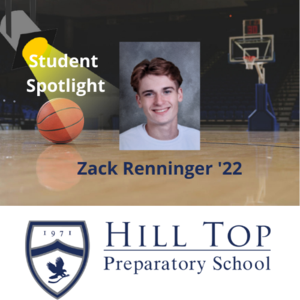 Zack is a senior in Hill Top's dorm program. He excels in the classroom and on the basketball court. He has numerous offers to play in college next year.

Zack Renninger ‘22 is a talented basketball player with a lot of options. The Hill Top senior already has a slew of college acceptance letters under his belt, including admission to Lebanon Valley College, Marywood University, Neumann University, Cabrini University, Elizabethtown College, Albright College, and Wilson College, just to name a few.

Zack, who plays guard for Hill Top and in the Heyday Men’s League, started basketball in second grade. He describes himself as a shooter and says his three-point shot is one of his best attributes on the court.

In the fall, Zack participated In a High School All-American Showcase, an event which brought together some of the best high school basketball players from around the country and put them head-to-head in drills and scrimmage situations. Zack was one of the top performers and earned an invite to another exclusive showcase this summer. While he plans to make his college decision in the spring, he would still have the ability to transfer if he receives an offer from another college coach at the summer showcase.

Zack has taken part in Hill Top’s dorm program since ninth grade. He appreciates the fact that he’s able to stay over at school and doesn’t have to commute an hour each way every day. He says the best part of living in the dorms is the connections he’s made with the other students he lives with. He found it to be an accepting environment and easy to make friends. He also feels that he has a head start on college since he is already accustomed to living in a dorm, doing his own laundry, washing his dishes, and improving his time management skills.

While Zack has enjoyed his time at Hill Top, he can’t wait to start college. He’s looking forward to joining a new basketball team and playing in front of bigger crowds, and he intends to major in exercise science.