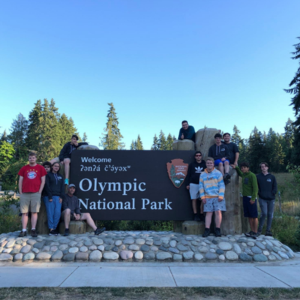 Jonah hopes to vlog Hill Top's trips to the Grand Canyon and London as well.

Recently, sophomore Jonah Lynn ‘24 created a compilation video of this Summer’s Washington State trip. The video consists primarily of pictures taken during the trip, including students spending some time at Quinault Lake in Olympic National Park, visiting the giant Sitka Spruce Tree (the largest Spruce tree in the world) and participating in various activities including hiking, fishing, kayaking, paddle boarding, and basking in the glorious natural scenery of the Pacific Northwest.

Jonah has dabbled in video production before, even creating promotional videos for Hill Top, but this project is his biggest undertaking so far, clocking in at 7:47.

“The Washington video by far is the longest video I’ve ever made, and the toughest,” Jonah said.

The most challenging aspect of the video was synching the music to the photos so that the timing matched up. Individually cropping each photo was also a time-consuming task. However, Jonah believes his future video projects will run smoother now that he has experience under his belt.

“Now that I’ve done one, I know how it goes, and it will be a lot easier from now on because I’ll know exactly what I’m doing,” he stated.

Jonah created the video in iMovie and hopes to move on to more advanced software such as Adobe Premier and Final Cut Pro as his hobby progresses. He credits his older brother, who works professionally in video production, as one of his influences to start making videos.

While he is uncertain if he wants to pursue video production as a career path, Jonah could see himself becoming a Philadelphia sports content creator, as he is an avid 76ers fan.

Jonah plans to attend both of Hill Top’s next trips to the Grand Canyon and London and hopes to be able vlog his experiences.